First Kiss, First Bite - THE TAMING OF THE WOLF 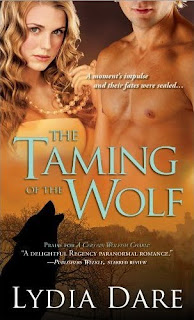 Most first kisses come after all sorts of build-up and sexual tension. The characters know each other and either can’t deny their desire for the other or are terrified by it, but give in anyway.

Neither of those scenarios are true for Dashiel Thorpe, the Earl of Brimsworth, and Caitrin Macleod, our hero and heroine in THE TAMING OF THE WOLF…

On bare feet, Cait padded along the hallway and down the main staircase. The last place she remembered having her book was in the duke’s study.

She turned the corner into the study and stopped short. Standing behind the duke’s desk was a tall man, one she’d yet to meet. Most of him was hidden in shadow, but his face was lit by the moonlight that filtered through the drapes. He was a blond Adonis, tall and lean. A vague memory of him, maybe from one of her visions, created unease within her.

A small gasp escaped her throat when he turned his amber gaze her way. “I’m sorry. I dinna ken anyone was up at this hour.” She turned to leave.

“Don’t go,” he said. Then he closed his eyes tightly and took a deep breath. “You needed something in Blackmoor’s study?”

“Aye, I left a book in here yesterday when I came ta find Her Grace.” She glanced quickly around the room, though she didn’t immediately see her copy of Maria Edgeworth’s Patronage. “Perhaps I left it in the library.” Perhaps I should run quickly from this room.

“Having trouble sleeping?” he asked, his tone amazingly familiar. As though he’d known her for a lifetime.

“Aye. At times, I canna get thoughts out of my head.” Why had she told him that? He probably didn’t care to hear how her visions played in her mind at all hours of the day and night, preventing her rest.

He walked around the desk and perched a hip on it. His hips were narrow, his shoulders broad. Stop ogling the man’s body, Cait. His eyes narrowed at her, as though he knew she had a secret. She closed her eyes and tried to get a vision of him, something to tell her who he was. But her mind was blank, which was more than disconcerting. Her mind was blank? That had never happened before.

“I canna tell yer future,” she muttered under her breath.

“Pardon?” He raised an eyebrow at her.

“Ah, there’s my book,” she said, smiling at him, hoping he’d believe she hadn’t a care in the world. She picked up a small, black leather book that lay on the desk behind him. It wasn’t hers, but it would have to do.

Before she could turn around, he reached out and grabbed her by the waist. She couldn’t even utter a gasp as he drew her body flush against his. Her breath stilled.

“What are ye—” she began, but he covered her mouth with his, his lips hard and urgent.
She shouldn’t let a man she’d never met before take such liberties. But he smelled so good. Felt so good. Tasted so good.

Her tongue rose to meet his as a whimper of pleasure left her throat. Her heart beat wildly as he tilted his head and deepened the kiss.

Cait had been kissed before, but never like this. Never so thoroughly that she couldn’t think straight. Never so expertly that her legs threatened to buckle. Never with enough passion that she could drown in it.

A tug to her hair sunk into her consciousness. He pulled her head back and looked into her eyes. He gently tugged, guiding her head until it leaned to the side, exposing her neck. She nearly jumped when his lips brushed feather-light down the side of her jaw as he trailed a kiss down her throat. He pulled at the neck of her wrapper and night rail until they opened, baring her shoulder to his gaze. She shivered.

When he reached the place where her neck met her shoulder, he sucked at the tender spot and then nipped her gently. It was the most sensual thing she’d ever experienced. Light-headed, she heard a moan escaping her throat. More. More, please.

He nipped her again, then opened his mouth wide and bit through the tender skin of her shoulder, jerking her instantly from the passion-induced haze.

“Ow!” she cried and smacked his shoulder. “That hurt!”

Unbeknownst to both Cait and Dash, that first meeting, first kiss, first bite – has sealed both of their fates. And what follows next is a mad dash (no pun intended) across Britain, into Scotland, complicated by other witches, werewolves, and an old suitor who still carries a torch for the beleaguered Caitrin.

Have you ever kissed someone without having been introduced?
Originally posted at casablancaauthors.blogspot.com on February 6, 2011
Posted by Lydia Dare at 1:00 AM